You are here: Home / Pray / Praying for Pauls in Vietnam

First, please prepare by reading through through Galatians 1:11-24 and Acts 9:17-22.  Then join us in prayer for the requests that follow.

In these passages of scripture we know Paul is talking about his own conversion experience.  He is saying that he received revelation from Jesus Christ…not through man nor through something taught to him from a man (Gal. 1:11,12)  He then goes on to identify a little about himself…that he was a persecutor of the church, a very religious contemporary among his peers, and perhaps a man continually before an ancestral altar (extremely zealous for ancestral traditions) (Gal. 1:13,14).

Gal. 1:15-17…we see that Paul responded to God’s calling.  He didn’t immediately consult with anyone or go to the apostles. But, we know he did get baptized and immediately began to give testimony about his conversion (Acts 9:20). However, it wasn’t until three years later that he actually went on to Jerusalem and met up with some of the apostles. His reputation had preceded him. Some, even though they didn’t know him by sight, knew about ‘the one who formerly persecuted’…and now was preaching!

As you have read through these passages, please pray in this same way for the following two areas:

Prayer Focus #1: Let’s pray everyday for the next week and a half that the Lord would be convicting those in Vietnam who are just like Paul, as he describes himself in these verses. Pray that those who might not even be hearing the Gospel directly would have a revelation from Jesus Himself and that the Holy Spirit would convict, and that they would respond. Pray that they would have the eyes of their hearts opened to the truth of who God is. Pray that those who are eager to speak out against the church or those who are deeply entrenched in ancestral traditions would have revelation! Pray that they, like Paul, would respond immediately to baptism and begin sharing.

Prayer Focus #2:  Let’s pray every day between now and the end of the month for those who, perhaps years ago, had a conversion experience.  Perhaps they have been sharing about their experience and proclaiming that Jesus is the Son of God.  Pray for those who, like Paul, don’t need a man to commission them, but rather they understand that their authority comes from Christ!  Pray that the Holy Spirit would divinely bring these people across our paths so that we can join with them in their task to reach the Vietnamese.

Blessings and many thanks to you as you join us in prayer! 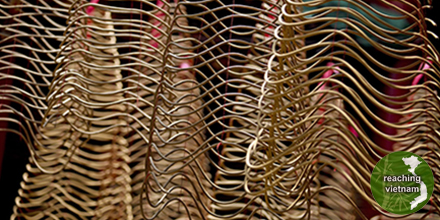