Pray for those affected by a significant increase of dengue fever in Viet Nam this year.  The incidence of dengue fever is always at its worst during the rainy season.  ABC news’ recent article reports that over 10,000 cases of dengue fever have been reported this week and the total reported cases represent a 42% increase over the previous year.  Over 20 deaths have been reported from the virus caused by mosquitoes which brings fever and exhaustion among other symptoms.  The reported cases are highest in the capitol of Hanoi and the economic hub of Ho Chi Minh City.

Pray that the government’s efforts to combat the virus including an emphasis on spraying high risk areas will be successful.

Pray for God’s healing to those affected by the disease.

Pray that God will be glorified through this crisis and that it would cause more people to seek a relationship with Him through faith in Jesus Christ.

Photo from a related article from VietNam News here. 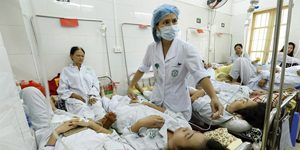 “I will bow toward Your holy temple and give thanks to Your name for Your constant love and truth.” Psalms 138:2 #pray4vietnam bit.ly/3sJQllx 4 hours ago

Please pray this week for the Lao people living in Vietnam to be reached with the Good News of Jesus Christ! bit.ly/3ynk4Ug 4 days ago

God, please remind a Vietnamese believer today to stand firm in their faith and know You are victorious all circumstances. #pray4vietnam bit.ly/3MvccF7 1 week ago