You are here: Home / Learn / What Makes a Successful Business? Phan was at university studying business, and he knew that to get a good job, he would have to improve his English. So Phan joined an English club just near the university campus. The club was run by Christians.

One day Phan asked a foreign friend at the club to help him prepare a talk for an English public-speaking competition that was coming up at the university. Phan had decided to talk about what makes a successful business, and this friend said he had the perfect illustration!

Using an English/Vietnamese parallel Bible Phan and his friend turned to 1 Corinthians 12 and began to study about a body made up of many parts with Christ as the head; each part of the body being important and with it’s own unique job. “The same is true of any company,” the friend explained, “Just imagine if everyone in the company wanted to be an accountant? Who would do the advertising? Who would make the products or sell them?”

Phan won second prize in the competition! But more than that, a seed had been planted in Phan’s heart, “Who was this Jesus who knew so much that is true today?”

Rapid economic growth in Vietnam, along with their induction into the World Trade Organisation, has allowed many new businesses to grow. A dynamic new generation of highly motivated young entrepreneurs is developing, driven by the desire to be prosperous. Like Phan, nearly 50 per cent of all university students enrol in business or economics courses , but what values are guiding their budding careers?

A drive through in Vietnam can look different from anywhere else in the world. This isn’t something new; it’s the normal. Pray for Vietnamese to be shaken by what is happening in the world and seek the One True God. Deuteronomy 30:19 #pray4vietnam 4 hours ago 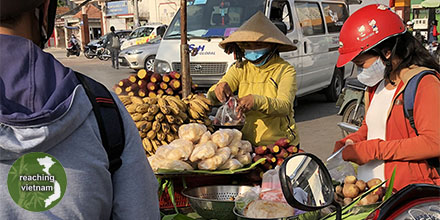 Please pray this week that the Mang and San Diu peoples of Vietnam will be reached for Christ! bit.ly/2xS8y6y 1 day ago

“But as for you, continue in what you have learned and firmly believed. You know those who taught you, and you know that from childhood you have known the sacred Scriptures, which are able to give you wisdom for salvation through faith in Christ Jesus.” 2 Tim 3:14 #pray4vietnam 5 days ago

Pray for groups to gather wanting to know about what Jesus offers; pray for churches to be started and a new history and culture of following the Most High God to begin. “I planted, Apollos watered, but God gave the growth.” 1 Corinthians 3:6 #pray4vietnam 1 week ago

Spirit lead me where my trust is without borders, let me walk upon the waters wherever you would call me. God, Your grace abounds in deepest waters. Your Sovereign hand is my guide. [Hillsong United] Pray for Vietnamese to trust Him in the challenges of life. #pray4vietnam 2 weeks ago