You are here: Home / Learn / The Persecuted 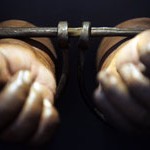 They might have been talking about the previous day’s soccer match, or the weather, or this year’s planting. But they weren’t. Under a shade tree shielded from the afternoon sun, at first glance the circle of young men appeared much like any other group their age. Crouched down in a resting position, they bantered and laughed, joked and encouraged. Each of them are first generation Believers in their family and each in turn lead a church, most that meet in their own homes. Around the circle they shared stories one by one.

“The last time they took me in, they held me for three days. They cursed at me and spit on me. They told me if I didn’t agree to stop having church they wouldn’t let me go. I wouldn’t agree and eventually they just hit me and told me to leave. I thank God that He gave me the strength to not give up.”

“They chained me to a wall with my hands over my head. They told me I had to stay standing up on my toes. If they caught me standing with my feet flat they would kick me in the stomach. One of them had something that would shock me with electricity, it really hurt. I thought of the pain that Jesus went through for me.”

“We were meeting and studying the Bible when they broke into my house. They started hitting the Brothers and Sisters and we all had to run out. They didn’t want to chase us I guess so we waited until they left and gathered back together and prayed.”

“Because we meet in my home for our times of worship we decided to put a wooden cross above my door. The police came and told us it was illegal and that we must take it down but we refused. Next they sent criminals to force me to take down the cross but I told them if they wanted it down they must take it down themselves. Then they got mad but they were afraid something bad would happen to them if they took down the cross. They believe it has power. So they dragged me from my house and beat me in the woods and left me to die. We will never take down that cross.”

There was no element of false bravado, no cavalier attitude, just a matter-of-fact telling of their testimony. The pain and hurt they experienced was genuine but they spoke of it without complaint. They are the persecuted of Viet Nam and they view such persecution as normal. Throughout the country, persecution and opposition to Christianity can take many forms.

They are the persecuted. Our Brothers and Sisters in Christ of Viet Nam. With faithfulness to God and bold proclamation of the Gospel they continue on confident in the promises of Scripture that with belief comes persecution. With them, we pray:

Please pray this week for the Lao people living in Vietnam to be reached with the Good News of Jesus Christ! bit.ly/3ynk4Ug 6 days ago